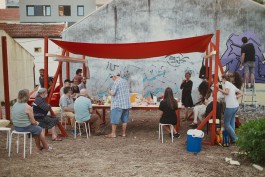 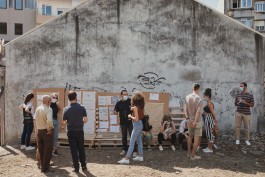 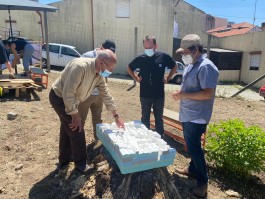 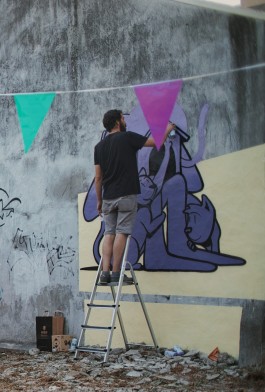 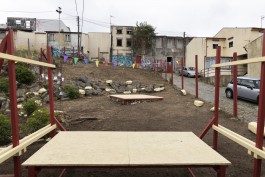 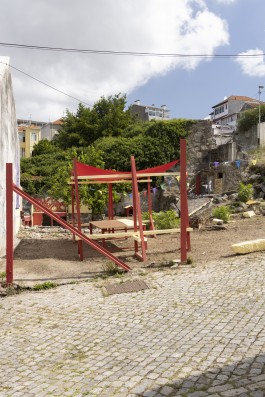 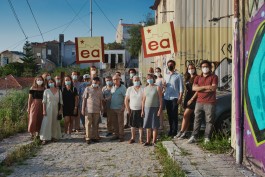 The ‘Bairro do Leal Appropriation’ workshop is part of an endeavour to raise awareness of the precarious nature of life in Porto’s urban interstices. The neighbourhood’s obsolescence and expectant character offered a starting point for reflecting on, designing and transforming a concrete place over a period of one week.

Social interaction between the team of young participants and the local residents played a key role in the architectural action. Following visits and discussions, a fenced off plot that had been abandoned for years and was once occupied by houses was identified as an intervention site. The absence of a green space for public use in the area was another reason for salvaging and improving the plot. Via a participatory process of self-building, the plot was appropriated and revitalised.

The first step was to remove the fence around the plot and to tame the wild, unkempt vegetation. This revealed the site’s physical and topographic characteristics: its slope; the concrete joists marking its outer edges; the ‘amphitheatre’ created by piles of granite rubble from the former houses; the butchered trunk of a eucalyptus tree; the leafy lemon tree; the gable of the neighbouring house; the ruins still standing and the makeshift shelters for stray cats (the site’s only ‘residents’).

In the next step, scale models and designs were produced to explore ways of appropriating the plot via small-scale actions and constructions that would foster new uses. The process was interspersed with talks by speakers with experience of participatory projects and self-building initiatives in vulnerable neighbourhoods in different contexts, and critiques with guests whose knowledge shaped our approach to the evolving project.

A series of operations with different scopes and scales was launched, based on our ongoing presence at the site. The intention was to use the entire plot to create a new ‘house’ with different ‘rooms’ suited to different functions. A small stage was built to supplement the ‘amphitheatre’, providing opportunities for small events, performances and meetings to be held. Using wooden beams on the flattest part of the plot, a structure to provide shade was built along with benches and a large table to encourage people to meet for gatherings and meals. A rest area was created in the shade of the lemon tree; shelters for cats were renovated; a former kitchen was given a new use as a support area for events, and the fence that had been removed was repositioned in the middle of the plot, symbolically evoking the trunk of the eucalyptus.

New and old elements were painted in the same colours as the adjoining houses (beige and red), lending a sense of continuity to the site and embodying the intention to extend it into Bairro do Leal and establish a dialogue with the surrounding area.

The workshop ended with a gathering with residents, neighbours and participants, which included performances, graffiti, food and an open-air cinema session. At the event, residents were invited to look after and appropriate the plot.

In subsequent weeks, neighbours created their own ‘urban furniture’, restored a concealed floor, planted a variety of plant species and laid out small stones to give a sense of belonging. Months after our intervention, the municipal gardening team regularly visits and cleans the plot. The new local dynamics are illustrative of the positive impact that small-scale actions can have in improving degraded or unused areas within the city.