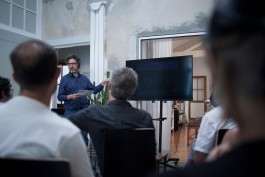 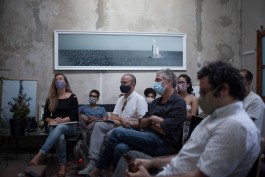 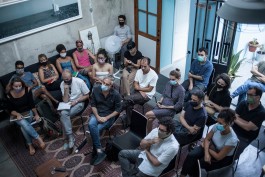 The guests for this year’s edition are Tiago Castela, Inês Moreira and Oren Sagiv, and the themes of the presentations are as follows:

Taking into account the present-day public debate in Portugal and elsewhere in Europe, this presentation recuperates an architectural history of how the state management of urban memorials of colonialism was differently articulated in Mozambique and Portugal within the postcolonial constitution of new political orders. The presentation foregrounds the persistent lack in Portugal of a properly political debate on the authorship of urban memorials of colonialism, as well as on the role of colonial traditions of memorialization in national subjectivity formation.

Fieldworkers Unite! could be a call sent by our research cluster to gather those who work outside the walls of offices, universities, libraries or formal teams devoting their lives to remote and unforeseeable sites. At “Curating the Contemporary [NOVA/FCSH]”, we are spread in different geographies and working out new approaches to curating architecture and space. We look at systemic complexity and at transversal problematics within territories, reporting on it and generating new proofs for knowledge production and for artistic practice. Along the fieldwork processes, we are slowly widening the very fields of our own operations. This time, I will refer to the work strands we pursue and to new places we are mapping.

In the geopolitical context of the Holy Land, the combination of historical events, myths, and traditions has fostered an extraordinary concentration of holy places. With supreme religious importance, many of these places have become arenas of bitter struggle, yet they continue to operate through a delicate web of ongoing political negotiations and arrangements. In Statu Quo: Structures of Negotiations - the theme of the Israeli Pavilion at the 16th international Architecture Exhibition, la Biennale di Venezia – traced the complex and fragile mechanism of coexistence that was established in the 19th century and survived the political changes in the region to this day. In Statu Quo indicates not only the instrumental use of architecture to lay claims in a conflict, but also its capacity to negotiate through spatial and programmatic possibilities.

Inês Moreira (Porto, 1977) is an active curator, editor, researcher and architect. PhD in Curatorial/Knowledge (Goldsmiths College, University of London, 2014), Master in Architecture and Urban Culture (Metropolis, UPC/CCCBarcelona, 2003) and Architect (FAUP, 2001). Post-Doctoral researcher at NOVA/FCSH where she found the new cluster: “Curating Contemporary Cultures: on Architectures, Territories and Networks”. Guest Professor at the Fine Art School of the University of Porto. Founding member and workgroup leader at the Cost Action “European Forum for Advanced Practices” (2019-2022).

Oren Sagiv is an architect, curator, and senior lecturer at the Bezalel Academy of Arts and Design, Jerusalem. The scope of his work ranges from large-scale public projects and temporary urban interventions, to small-scale and experimental interdisciplinary projects. Oren was the designer of the Intersection Project in Prague (2011), co-curator and head architect of the 31st São Paulo Biennial (2014), and chief designer of the Israel Museum in Jerusalem from 2011 to 2018.