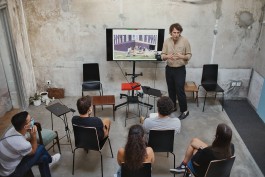 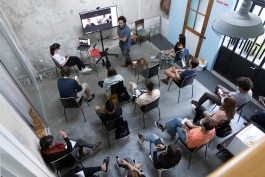 The 2021 edition is integrated in the programme “Bairros Críticos. Arquitetura e Apropriação no Bairro do Leal” and had as guests Alberto Pottenghi and Elisa Silva.

Alberto Pottenghi (Mantua, 1977) graduated in Architecture from the Milan Politecnic and attended the Faculty of Architecture of the QUT, Queensland University of Technology (Brisbane, AUS) in 2004. Between 2006 and 2007 he was in Japan following a research project about Japanese traditional architecture and society. He has collaborated at several architecture practices in Japan and England. Among these, he was project manager at Claudio Silvestrin Architects (London, UK) for works in California, South Korea and France. He is co-founder of MONOatelier, based in Milan and Porto since 2009, developing projects in Italy, Portugal and Switzerland. From 2011 until 2018 he collaborated at the Accademia di Architettura di Mendrisio (CH), with Valentin Bearth (Chur, CH) and Eduardo Souto de Moura (Porto, PT). Since 2012 is collaborating with Francis Kéré (Berlin, DE) with which he founded, and currently leading, the Building Reality construction workshop that takes place in various sub-Saharan African countries. From 2013 until 2017, in collaboration with the Accademia di Architettura di Mendrisio (CH), he has coordinated the Learning by Doing workshop, building several temporary structures for many public institutions, including the Architecture Biennale di Venezia. In 2018 he was a professor at the Introduction to the African continent course at the Accademia di Architettura di Mendrisio (CH). From 2017 he is research associate at the chair of Architectural Design and Participation, under the supervision of Francis Kéré, at Technical University of Munich (DE). He is currently involved, as guest lecturer, at the course Advanced Design Studio: New Tools at YALE School of Architecture (New Haven, USA).

Elisa Silva is principal and founder of Enlace Arquitectura and Enlace Foundation, established in Caracas, Venezuela. The two entities work in tandem to advance the integration of cities including informal settlements through participatory design processes and cultural programs. Their work has received awards in numerous design competitions and international architecture and urban design biennials. The San Juan María Vianney Church in Media Legua, Venezuela was awarded in the XI BIAU 2019 and the project Integration Process Caracas in the barrio La Palomera is part of the XVII Venice Architecture Biennial 2021. Elisa received the Rome Prize from the American Academy in 2005, the Wheelwright Fellowship from Harvard in 2011, Graham Foundation Grant 2017 and the Lucas Artist Fellowship 2019. She is co-author of CABA: Cartography of the Caracas barrios (2014) and Pure Space: Expanding the Public Sphere through Public Space Transformations in Latin American Informal Settlements (Actar, 2020). Elisa is visiting professor at Princeton University School of Architecture and Daniels Faculty of Architecture, Landscape Architecture and Design at the University of Toronto. She has taught at the Harvard University Graduate School of Design and the Simón Bolívar University in Caracas.