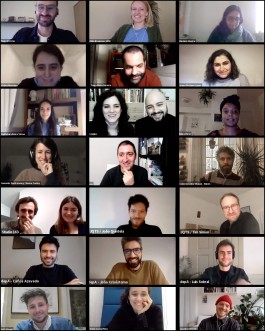 ‘Quinzena’, in its third edition, is a mini-festival of architecture, urban culture and spatial practices. It celebrates the anniversary of the building where INSTITUTO was set up – the original project by architect Júlio de Brito was presented to Porto City Council on the 20th January 1955 and approved about two weeks later, on the 7th February. The record time approval of the project, in a fortnight (quinzena in Portuguese), is now celebrated annually with this series.

Quinzena’21 features individuals and entities addressing pertinent themes in contemporary architecture practice— nature, housing and health, civic action, communication, among others. We meet electronically for 6 sessions, with the contribution of architects but also artists, activists, researchers, urban planners, photographers, students and designers. Participants hail from Porto and Portugal but also from several countries in Europe and even Latin America. Moderated by architect and journalist Catarina de Almeida Brito, the objective is to cultivate conversations with different perspectives between new, emerging and more established practices.

2021 marks the beginning of what the United Nations has declared as the decade of ecosystem restoration. What is the value of nature in built spaces? How can we cultivate wilderness in our daily lives? This session will be held in English.

In 2020, we started giving more importance to the houses we live in, to the new relationship between individuals and their communities, and to the collective health of our neighbourhoods. What actions can we take to improve the way we live together? This session will be held in Portuguese and Spanish.

From London, to Porto and Lisbon/Hamburg, these three emerging studios find different ways to work in architecture, whether in rehabilitation, temporary installations or curation. This session will be held in English.

Every day we are bombarded with information: at a time when the role of the architect is questioned several times, how can we communicate the work of architects to the public? This session will be held in Portuguese.

At a time when human frailty is more apparent, how can we stimulate feelings of collectiveness, mutual care and ‘civicness’? This session has the participation of artists whose practice focuses on the collective. This session will be held in English.

Around the world, the construction of temporary interventions in urban spaces, so-called 'pop-up', is slowly gaining ground. How can we use art and architecture to design spaces for communities and by communities? This session will be held in English.