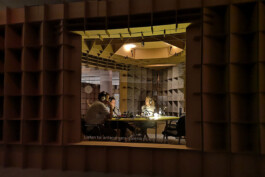 Over the course of four episodes of the radio residency programme Sound It from Rádio Antecâmara at the CCB, Paulo Moreira, founder and artistic director, and Raquel Pais, project and programming manager, conversed with architects, curators and partners of INSTITUTO about the ideas and projects that prompt them to continually push the boundaries of what this cultural project can be and do.

Titled ‘Between 1:1 and 1:100.000’, a reference to the different scales present in architecture, the conversations covered different dimensions, formats and stakeholders. The episodes explored the events organised by INSTITUTO, from the annual programmes of talks Quinzena, WIP and Expedition to exhibitions and workshops with the local community and the Arquiteturas Film Festival, which will be organised by INSTITUTO and held in Porto this year. Throughout the four episodes, listeners were able to get to know some of the people behind the lively programme of events organised at this independent cultural venue in the city of Porto.

In the first episode, Paulo Moreira, architect and founder of INSTITUTO, conversed with Pedro Campos Costa, architect and founder of Galeria Antecâmara. Both venues are exhibition spaces – and much more – which are directly linked to their respective studios: Paulo Moreira architectures and CCA – Campos Costa Arquitetos. In an intimate, informal conversation, the two architects discussed the principles guiding the sister projects, building bridges and establishing a dialogue between Porto and Lisbon.

The two venues share an openness to hosting speculative projects in the field of architecture, accepting error and encouraging experimentation. They also place great importance on publication. The Yearbook, an annual compilation of INSTITUTO’s activities, is an essential channel for reflecting on the themes explored and disseminated by the venue, according to Paulo Moreira. The latest issue, focusing on 2021, will be published later this month. Meanwhile, the Galeria Antecâmara organises the annual event A Puta da Leitura, which will be held in late September this year. It is an informal gathering between authors, editors and readers, accompanied by books and drinks.

The two organisations began to collaborate in 2021, with the launch of the podcast Luandando and the travelling exhibition Kubanga Kukatula, curated by Paulo Moreira. This was followed by the series of conversations on Sound It, which made it clear that they would continue to work together to combine “discipline and profession” and to promote experimentation and research in architecture, the arts and the intersections between the two disciplines.