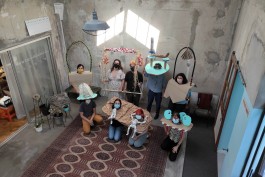 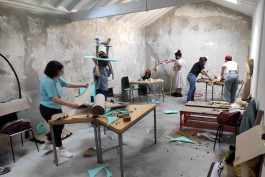 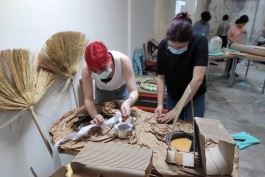 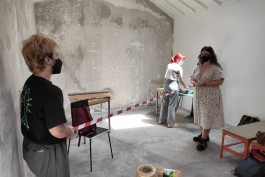 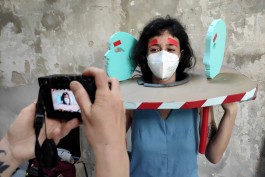 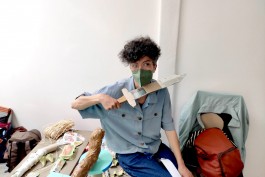 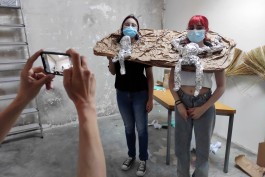 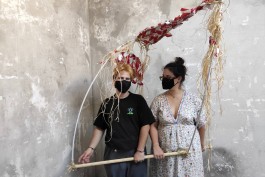 Xô! Andor!
Workshop for building stands
and other supports for processions and parades
29.05.2021

“Andores” are structures used in parades for people to transport images and icons on the shoulder. In the north portuguese vernacular, the word “andor” is used to send someone away. “Xô! Andor!” The constructions we make in this workshop will be used for just that, for sending out there things that are hidden, forgotten, repressed. Each participant will have theirs.

For years, aapA has been in pursuit of a chimera, a flying mythological being, imprisoned in the catacombs of CMP [Porto City Council]. This is the figure we want to send out to the street, in order to open old wounds and discuss the significance of its absence, and above all its presence.

Ana Torrie holds a bachelor in Sculpture and a masters in Drawing and Printing Techniques - FBAUP. In 2013 she founded, and became coordinator, of Guilhotina, an atelier for engraving, printing and self-editing, residencies and workshops. Her artistic work explores the contemporary condition through fiction, creating alegoric characters and narratives. No one better than Ana Torrie to tutor this workshop, exploring the “andores" and creatures to come.

Associação de Amigos da Praça do Anjo was founded in January 2007 following the theft of the sculpture A Anja by José Rodrigues from Praça de Lisboa. Since then, the association has promoted debate surrounding the growing privatisation of the public space through a variety of activities, including guided tours, memorial stones, public petitions, performances and commemorative dinners.