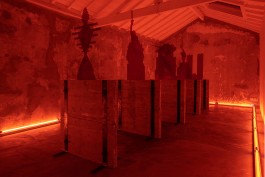 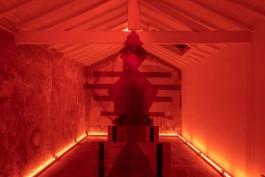 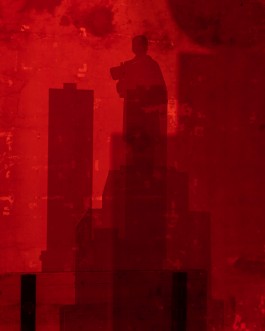 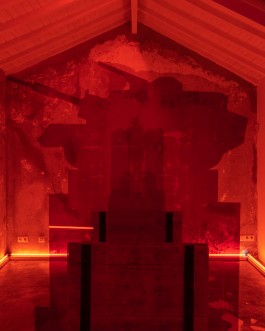 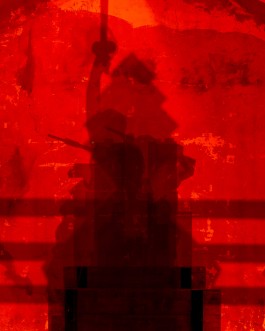 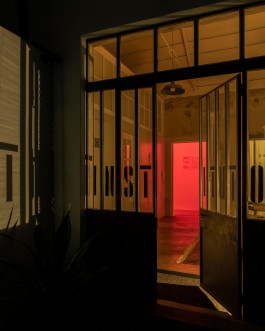 Largo do Kinaxixi, one of the main squares in Luanda, was built above a huge lagoon during the colonial regime. According to Bantu legend, the lake was home to a Kianda or goddess of water. Like the lagoon, this mythological being, daughter of Nzambi (God the Creator), rather like Yemoja in the Yoruba tradition and Yemanjá in the Americas, was buried to make way for colonial buildings. It is believed that the Bantu peoples, who emigrated from East Africa, were the first to conquer the region after driving the nomadic people who originally lived there towards the desert. Aiming to explore the immense symbolism of the Largo, Kiluanji Kia Henda drew on this first occupation of the space to take us on a journey through almost 400 years of history.

The artist has been commissioned to present a performance at the 50th anniversary of the International Film Festival Rotterdam (IFFR) in 2021, in collaboration with artist and musician Satch Hoyt. During his residency at INSTITUTO, he produced a scale model of the installation. A red rectangle of light on the floor defines the space, which contains five figures: each of them represents one of the five stages in the chronology of the Largo. The performance at the festival will include live music and a recited text that gradually reveals the history of Kinaxixi and of a nation, with some fictional embellishments.

In 1937, the Portuguese Empire commissioned sculptor Henrique Moreira to produce the Monument to the Dead of the Great War, known as Maria da Fonte. A granite pedestal served as a base for European and indigenous soldiers, who gathered around Victory. The statue was blown up using dynamite in the early independence years in 1976/77 and a Soviet tank was placed on the pedestal. As the communist apparatus collapsed, the tank was removed in 1991 leaving an empty space.

At the end of the civil war in 2002, the space was filled with a statue of Queen Njinga Mbandi, ruler of Ndongo and Matamba (1582-1663) and an anti-colonial warrior, to commemorate the 27th anniversary of the country’s independence, which was an important moment in restoring national pride. However, in 2008 the Queen was moved to the Fortress of São Miguel, now the Museum of the Armed Forces, while the new towers of Kinaxixi Shopping Centre were built. To do so, the modernist building housing Kinaxixi Market was demolished. Sidelined by the petrodollars pouring into the country with the economic boom, the Queen remains at the fortress while the concrete towers on the Largo are still incomplete. These imposing structures may be viewed as a monument to money laundering.

The timeline extending from the pre-colonial period to the present is marked by several violent historical episodes and their interpretations, revealing a grotesque manipulation of history itself and of the Largo do Kinaxixi, a place in constant metamorphosis. These five monuments are depicted in the models, showing the far-reaching changes occurring in Angola and the remarkable flexibility with which these changes are expressed in the public space. The artist considers that it should always be possible to alter monuments as they reflect the passions and beliefs that shape the times in which we live. This idea is contrary to the way in which public space is appropriated and instrumentalised to perpetuate narratives of power, despite often legitimising and celebrating figures who violated the human freedoms and values that we profess to defend.

Kiluanji Kia Henda employs a surprising sense of humour in his practice, often homing in on themes of identity, politics and perceptions of postcolonialism and modernism in Africa. Practicing in the fields of photography, video, and performance, Kia Henda has tied his multidisciplinary approach to a sharp sense of criticality. His conceptual edge has been sharpened by immersing himself in music, avantgarde theatre, and collaborating with a collective of emerging artists in Luanda’s art scene. In complicity with historical legacy, Kia Henda recognises processes of appropriation and manipulation of public spaces and structures, and the different representations that form part of collective memory.

Kia Henda participated in several residency programs in cities like Cape Town (2008), Venice (2010), Amman (2013), Sharjah (2014), and recently completed a three-month residency at Luma Arles, France. He was the recipient of the 2018 Frieze Artist Award and in 2012 the recipient of the National Prize for Art and Culture, awarded by the Minister of Culture in Angola. His work has featured on biennales in Venice, Dakar, São Paulo and Gwangju, as well in group shows at numerous institutions, among which: Centre George Pompidou in Paris (2020); Zeitz MOCCA in Cape Town (2019); Tate Modern in London (2018); Smithsonian Institution in Washington (2015); Guggenheim Museum in Bilbao (2015); New Museum in New York (2014).